Anne Michael-Sneed – what a woman! 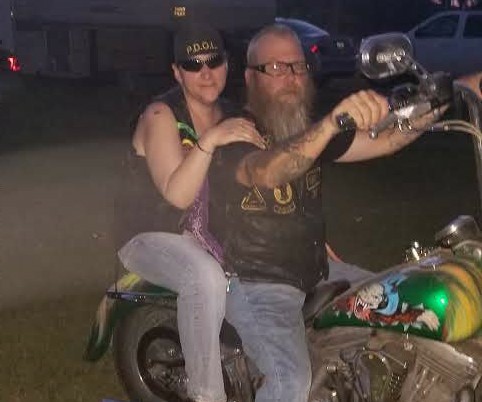 She has been thrown many curveballs in her life, but she just keeps on going! From being diagnosed with Multiple Sclerosis and then cervical cancer in her 20s to riding motorcycles with her husband today, Anne is a fighter all the way through.

In mid-2017, Anne discovered a mass in her groin. In November of 2017, she had the mass surgically removed. A local surgeon performed this surgery and in the process found another lesion that was determined to be cancerous.

Anne was referred to Dr. Carolyn Matthews in December, who started her on a regimen of radiation and chemotherapy. Radiation seemed to eliminate the lesion by March 2018 after 33 rounds, but five rounds of chemotherapy made Anne extremely sick. It turned out, however, that the morphine she was taking along with the chemotherapy was the culprit for the sickness. She stopped the morphine and felt somewhat better, though Anne still struggled with some nausea.

Three months after her radiation was completed, Dr. Matthews suggested that Anne come to Mary Crowley after a PET scan showed that her cancer had spread to her liver, lymph nodes, and lungs during treatment. Anne was labeled as chemo resistant and terminal. Anne met with Dr. James Strauss at Mary Crowley in the summer of 2018, who answered Anne’s concerns about enrolling onto a clinical trial. Anne’s main question to Dr. Strauss was if there was any chance she could be given a placebo on trial. He quickly assured her that none of the trials at Mary Crowley involve the use of placebos. She was thoroughly relieved and decided to enroll onto a trial at Mary Crowley.

Anne praises the care she has received from the staff at Mary Crowley, particularly from nurses Kevin and Danielle. “The staff here are rock stars,” Anne says. “If I ever have a question, they have been right there to answer it.” Today, she looks wonderful and says she is feeling great!

However, there is more to Anne’s story.

Anne and her husband met in the middle of Highway 641, both on motorcycles. Anne and Chris hit it off and found that they were meant to be together. Anne now rides on her husband’s bike, feeling that is much safer since chemo seemed to take a lot of her vision away.

Anne and Chris got married in 2016. This was Anne’s first marriage, and there are no children between her and Chris. However, Chris has three children from a previous marriage, so Anne had a readymade family! She was just fine with this since she had a hysterectomy at 22 years old due to cervical cancer and never expected to have children of her own. The three boys are now 32, 29, and 23 years old. All of the boys love Anne and look to her for guidance. Keeping them company at home now are a loving family of dogs ranging from pit bulls to a Chihuahua. These are their children now!

Both Anne and Chris could not say enough about Mary Crowley Cancer Research and its staff. They are a delightful couple that has overcome many obstacles in life together and continue to have a happy and healthy outlook!

Ride on Anne and Chris! 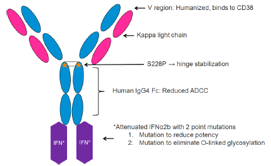 Antibodies are the specialized proteins made by lymphocytes, the cells that comprise the immune system. An antibody can bind to a target such as a structure on the surface of a cell. The target could be something that is characteristic of a certain bacterium or virus. The specificity of the antibody for its target is determined by the sequence of the amino acids that make up the antibody. The immune system makes thousands of different antibodies.

Antibody-drug conjugates (ADCs) have been studied for many years. These antibodies have typically attached a toxic chemotherapy drug to a synthetic antibody that targets a protein typically found on certain types of cancer. This approach has led to the successful development of several drugs including Kadcyla for treatment of breast cancer and Adcetris for Hodgkin lymphoma. However, many antibody drug conjugates were not successful because of the toxicity of the payload. We now have several studies based on new ideas about the design of antibody drug conjugates.

One new study (19-36) uses a drug very similar to a standard chemotherapy drug rather than the more potent and potentially more toxic payloads used in earlier ADCs. Two new studies have payloads that are not chemotherapy drugs. In one case (19-39), the payload is a modified form of interferon, a potent stimulating signal in the immune system, and in the other (20-01), the payload is an inhibitor of a protein that cells need for survival.

The Secret Life of Regulatory 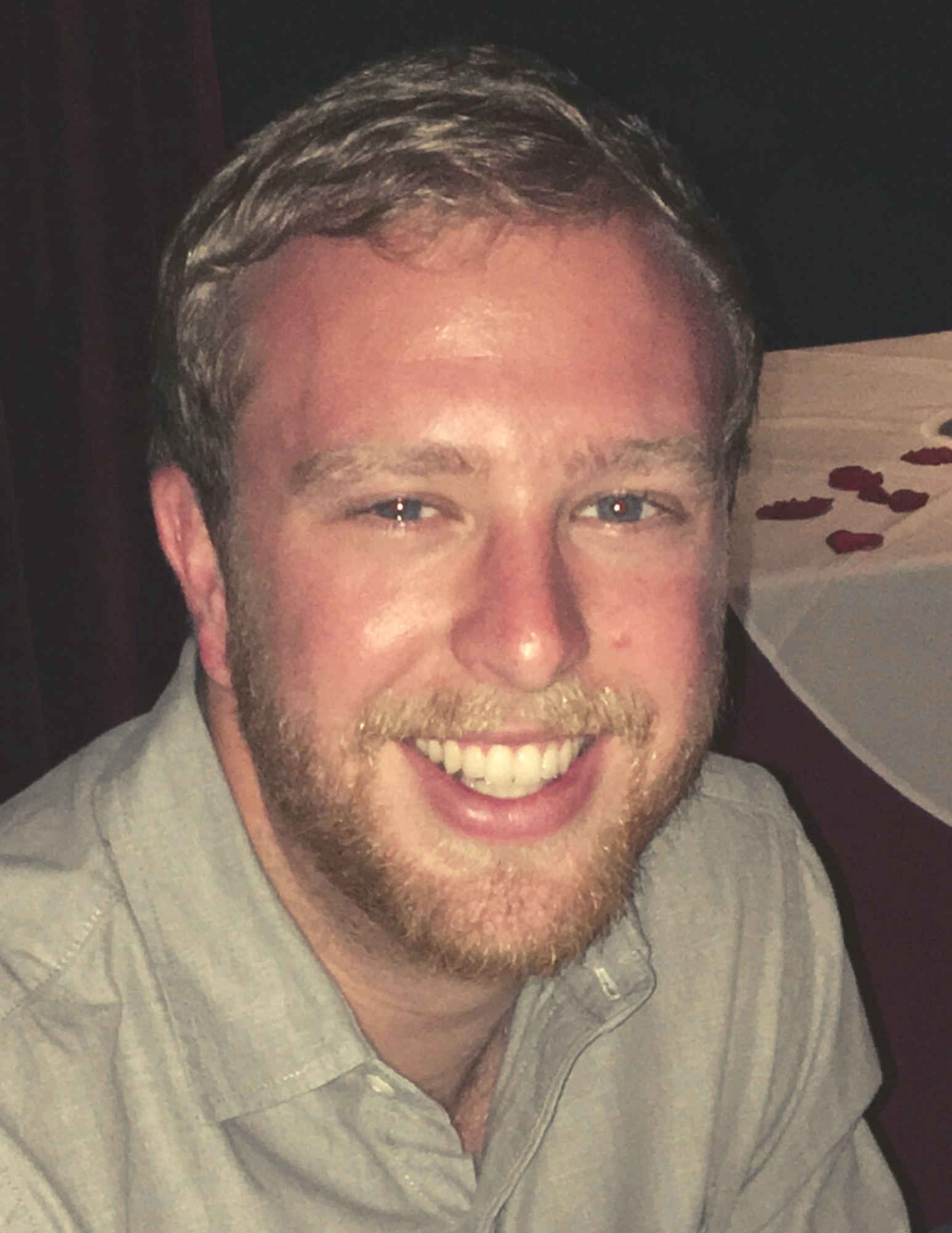 “I work for a cancer research center.” My line of work has always been something I take pride in but the role I play at Mary Crowley normally requires a bit more explanation. The regulatory aspect of the industry is not the most glamorous, but it is essential to provide clinical trials as options to our patients and helps ensure their safety, as well as the integrity of the research.

At Mary Crowley, we take pride in our ability to identify and quickly open trials that provide treatment options to our patients. But what happens between finding a trial and actually being able to enroll a patient on said trial? This is where the regulatory piece starts.

After identification of a specific trial, the team will prepare numerous documents required by the pharmaceutical company running the trial (sponsor) and the FDA to show that our doctors and staff are qualified to participate. Another crucial piece is writing the informed consent. An informed consent is one of the most important documents utilized on a clinical trial. It is used to explain the trial to the patient, ensure they are aware of any relevant safety information tied to participation and confirm that they understand it is their choice to participate. While the consent houses a vast amount of information, it is important that it is written in a manner that the patient can understand. For this reason, the consent often goes through multiple rounds of revisions/negotiations with the sponsor before a final version is agreed upon. All the documents that are prepared during development of a trial must be reviewed and approved by the sponsor, so detailed completion really helps move the process along and avoid any unnecessary hiccups.

Now that the sponsor has approved everything, the trial can start, right? Not quite. Once all regulatory documents are complete and sponsor approved, the trial is ready to be reviewed by an IRB (institutional review board). These groups are made up of at least five members of differing backgrounds who provide scientific and ethical review of clinical trials. Mary Crowley’s IRB must be notified of an upcoming trial reviewalmost 3 weeks in advance of their  meeting, which puts an increased emphasis on efficient negotiations with the sponsor regarding anything the IRB reviews. The IRB will review the trial protocol and related documents, any relevant safety information as well as the informed consent. Generally, the board members will have a few questions about the conduct of the trial and may also want to make some changes to the consent form, to ensure readability for the patient. At last, once the meeting is over and all questions have been answered to the IRB’s liking, the trial is approved!

Once this approval is in place, the contract is signed and we have the green light from the sponsor, we can finally begin to offer the trial to our patients. All that work just to get one trial open! The process of opening a trial generally takes between 6-8 weeks from the time the trial is selected, and while some of the works can be tedious, it is 100% worth it when you read the letters from patients or their families thanking Mary Crowley for providing hope to their family and loved ones.

Be the Difference Foundation's Wheel to Survive

Mary Crowley supporters and staff members joined our friends at Be the Difference Foundation at their annual Wheel to Survive fundraising event on February 23. Wheel to Survive is a relay-style spin event where members of a team take turns spinning for an hour. This signature event raised more than $320,000! The Mary Crowley Wheelers for Hope look forward to participating each year.

The Crowley-Carter Foundation awarded Mary Crowley Cancer Research with a generous grant of $100,000. The funds will allow us to open more innovative clinical trials for waiting patients. The implementation of clinical trials forms the core of our charitable mission to provide more options for cancer patients who are told they have none left. Clinical trials also further cancer research by advancing a potential new treatment one step closer to FDA approval. We are grateful to the Crowley-Carter Foundation, as they have been a longtime supporter of Mary Crowley for over 10 years. 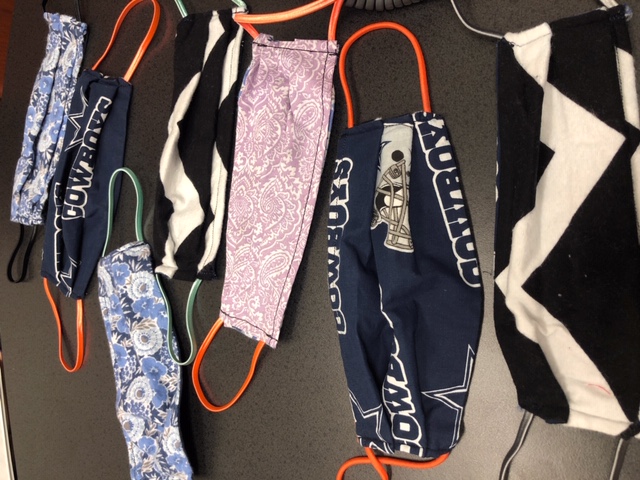 Local Dallas sewing groups came to the rescue this month when Mary Crowley put out the call for homemade masks to offer our patients and their caregivers. These masks help protect patients as they travel to and from appointments in an effort to better protect them from COVID-19. Our team has already begun distributing them, and the patients and their families are so grateful!

Mary Crowley staff wore blue on March 5 for Dress in Blue Day to support colorectal cancer awareness. Each year, Mary Crowley is the beneficiary of the DFW Undy RunWalk hosted by the Colorectal Cancer Alliance (CCA), apre family-friendly undy-themed RunWalk with the goal to provide support for patients and families, caregivers, and survivors; to raise awareness of preventive measures; and inspire efforts to fund critical research. This year, Mary Crowley received over $7,000 in funds from the CCA to help open a clinical trial for colorectal cancer patients. 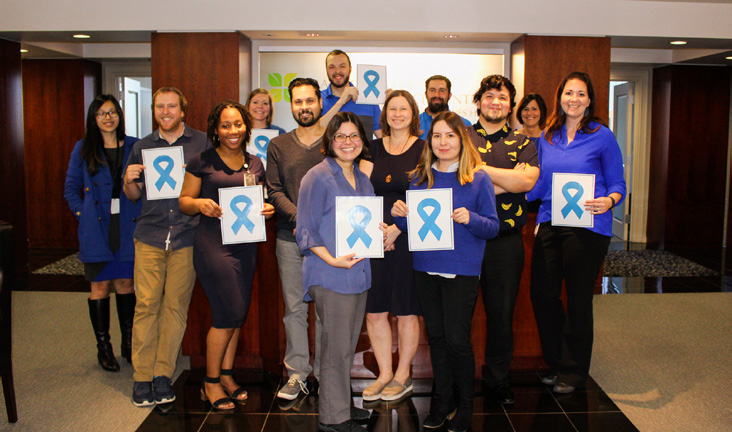 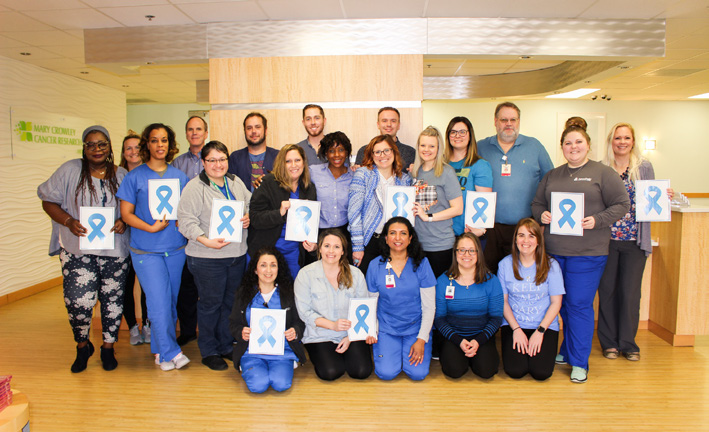 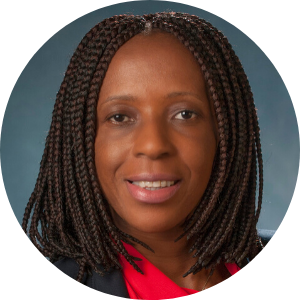 1. Where did you grow up? Zimbabwe—it holds a special place in my heart. It is a landlocked country in southern Africa. It is the place where I was born and where most of my family still resides. It is where I draw my inspiration as healthcare provider. However, Dallas ,Texas, has been my second home for the past 20 years. It has been my pleasure serving oncology patients and families in the DFW metroplex area.

2. How did you first hear about Mary Crowley and what inspired you to work here? My wonderful colleague Jana Adams, who is a research nurse here at MCCRC and with whom I previously practiced and worked closely for several years at Parkland Hospital, reached out to me when this position opened up. I was inspired to be part of this noble cause, giving hope and bringing cutting-edge treatments to North Texas.

3. What is your favorite part of your job? Everything. Providing care to my patients and their families is always an honor. The approach at Mary Crowley is more pragmatic and very patient-centered while exploring groundbreaking cancer treatment via clinical trials.

4. What inspired you to choose oncology nursing? I was influenced by personal tragedies; my family endured the pain of losing my father and my sisters to cancer and other chronic illnesses. Growing up without a reliable healthcare system, we travelled several miles to reach the only regional hospital in our area. I was humbled and grateful for the unselfish service we received from the healthcare multidisciplinary team and  the support from our community. Hence, I have embarked on  a journey to understand cancer and be an advocate for other families impacted by this disease.

5. What do you enjoy doing in your free time? I stay busy. I love to experience different cuisines and cultures and explore different continents. I practice yoga. I love listening to country music, rock, and jazz.