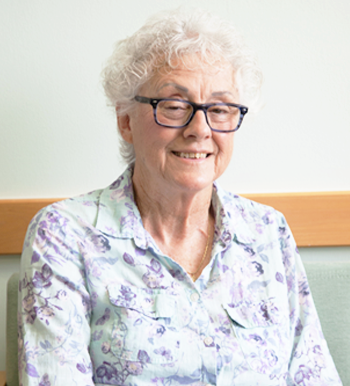 Carolyn Winchester, age 72, is a lovely woman, retired and enjoying life in the cabin she and her husband built together after her retirement in 2017. Sitting quietly in the Mary Crowley infusion area beside Jack, her husband of 53 years, waiting for her infusion of an investigational agent that was personalized for her particular cancer, Carolyn was pleased to tell the story of her long cancer journey and how she came to Mary Crowley Cancer Research.

Carolyn was told her mammogram results were negative in October of 2002, but she had a lingering feeling that something was not right. She went to her primary physician for an annual check-up in January 2003 and he suspected it was just a fatty cyst. Even so, Carolyn insisted on a biopsy. The result was breast cancer. She then underwent surgery to remove her right breast/lymph nodes followed by reconstruction surgery at a later date.

Carolyn described the next few years as “hurry up and wait,” saying it seemed to take forever to go through all the treatments - surgery to chemo to radiation. Afterwards, the cancer appeared to be in remission. She went to routine check-ups every six months and was placed on Arimidex for the next ten years, a drug shown to either slow or deter the growth of any additional cancer. During this time period, her right breast implant became infected and was surgically removed; making it her third surgery.

In 2014, Carolyn noticed more knots in her neck and back area and returned to her oncologist to have them checked. Unfortunately, they proved to be cancerous and it was also discovered that her breast cancer was triple-negative. After the diagnosis, Carolyn's oncologist in Fort Worth suggested she contact Mary Crowley Cancer Research and evaluate clinical research trials. She enrolled in her first trial that lasted for a year followed by a second trial, both of which had minimal effect on her cancer.

Three just might be Carolyn’s lucky number! She enrolled in her third trial at Mary Crowley in May 2018, -a combination PARP 1 /2 Inhibitor plus chemotherapy. The chemotherapy is used to sensitize the cancer cells, while the PARP inhibitor disallows them to replicate by rendering her mutated BRCA1 gene useless. With this approach, cancer cells are unable to grow and/or replicate, ultimately leading to their demise. Since the onset of her trial in May, Carolyn has seen an 84% decrease in her cancer! She is continuing the clinical trial with regular scans every eight weeks.

Carolyn and Jack have two grown children – a son and a daughter. They also have two grandchildren, one of which lives with them. Carolyn and Jack love to travel and hope to do more in the future. Carolyn has enjoyed traveling to Egypt, Kenya, Ireland, Germany, Austria and Hawaii. Next on the wish list is to travel throughout the United States.