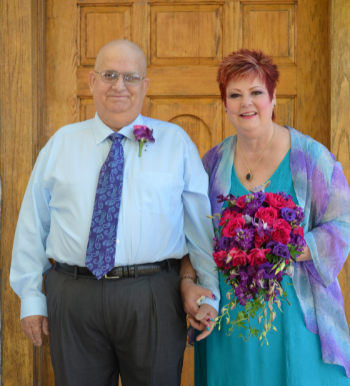 Jan Reeves met her husband Rodney on an online dating site in 2011. Rodney sought a partner in his own journey battling prostate cancer after his wife of 28 years passed away from colon cancer in 2008. Jan herself was a cancer survivor and had also lost a spouse to cancer. The two instantly connected over the phone. Soon after, Rodney drove 100 miles from his home in Henrietta to pick Jan up in the Colony for a date, and two weeks later, Jan found herself meeting all of Rodney’s family. After a few days in Henrietta, Rodney knew that he wanted Jan to stay for good, and four weeks later, they were married facing the Sierra Blanca Mountains in Ruidoso, New Mexico, in August 2011. They enjoyed a week-long honeymoon there, Rodney’s first vacation in over 20 years.

Jan happily relocated and began working with Rodney at his contracting company. However, in 2012, Rodney’s cancer worsened, and he realized he would need to close the company and go on disability. Jan knew they would need insurance for the fight ahead and reached out to contacts in the Austin area where she had previously been a school counselor. They moved to Austin in 2015. In early 2019, the treatment options in Austin began to dwindle, and they learned about Mary Crowley Cancer Research. They decided to move back to Henrietta to be closer to Rodney’s family and support system, and to be closer to Dallas for his new treatment plan.

From the start, Rodney was excited about the prospect of different possible trials. In May of 2019, he was thrilled to get a call that Mary Crowley had a trial for him. They were struck by the warmth and clarity the Mary Crowley Cancer Research staff brought to the process. The doctors were calm, factual, and never made them feel pressured to choose any one direction. “We never walked away feeling like we didn’t understand what was going on. They broke it down into everyday language for us to understand and make decisions,” Jan recalls.

When they faced challenges, Jan would call the staff and always found them calm and reassuring about what to expect and what to do, putting the couple at ease. Having been a caregiver for her first husband during his cancer journey, and now for Rodney, Jan was astounded at the attention and support for her specifically. “The social worker put herself into our situation and would call me, as a caregiver, to check-in. The other places acted like the caregiver was just there – an appendage. It was not that way with Mary Crowley. They cared about me and invested time in me emotionally. As we progressed and things at the end began to go a different direction than what we were hoping, there was a lot of attention given to me. So much caring. Genuine caring.”

Rodney ultimately lost his battle with cancer, but not before they made one more trip to Ruidoso for a final vacation, where their marriage began. Jan looks back gratefully on her time with Rodney. “I know that he’s in a safe place, and he’s happy, healthy, and joyful having a cup of coffee. I recall his sense of humor, and the way he lived his life was just the best. I’m so thankful I had the time that I had and got to experience so much with him.”

Jan now lives in the home she and Rodney made together in Henrietta with their two boxers to entertain her and enjoys visits her daughter and granddaughters in Carrollton, as well as with Rodney’s granddaughters who live nearby.

“Cancer doesn’t just affect one person, it affects so many,” she says. “The way to deal with that sadness is to tell the story because you tell the good and the sad, and the good pulls you through.”