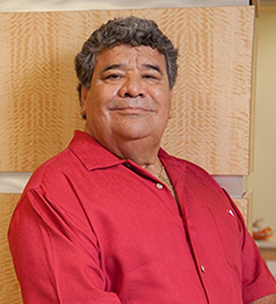 In 2006, Mike was having a routine checkup when his physician found a lump on his throat.  The physician called with biopsy results as Mike was on his way out of town, and he suggested scheduling a meeting upon Mike’s return. Mike refused to wait for the news, insisting to know immediately. The news was thyroid cancer.

Surgery was scheduled to remove the thyroid, and the tumor was larger than anticipated, wrapped around his vocal cord.  During the surgery, Mike’s vocal cord was nicked which impaired his speech, requiring him to go to speech therapy in addition to the traditional cancer treatment of nuclear iodine.  Six months later they found that the cancer had spread to the lymph nodes which required another round of nuclear iodine treatment. Mike did not have a positive response; his tumor markers continued to rise, and several lesions were found on his lungs.

Mike went to an out of town cancer center to participate in a clinical trial.  A new baseline scan was done and the largest lesion was found near his esophagus.  Mike was ready to begin a clinical trial when abruptly it was halted because doctors discovered a problem with his heart.  This disqualified him from that clinical trial.  Other trials were reviewed, but the only other trial offered by the out of town cancer center for which Mike qualified required a large amount of upfront money and out-of-pocket payments for each treatment.  Mike chose not to participate in that trial.

Back in Dallas, Mike went to see his cardiologist who referred him to a good friend -- a doctor at Mary Crowley Cancer Research.  In 2010, Mike enrolled in a clinical trial for thyroid cancer.  Over the course of the next six years, Mike participated in five clinical trials at Mary Crowley. While there has been small incremental growth of his tumor, removing it would be more debilitating than managing the cancer. Mike said, “Mary Crowley has been always willing to look for something else when the current trial stopped working.”

The road has not been easy for Mike, but he seems to find humor in his situation. He has learned to put cancer in a box: he pulls it out when he gets treatment, and he puts in away when he leaves.

Mike is grateful for the care he has received at Mary Crowley. He says, “Being at Mary Crowley is like being taken care of by family.” Mike has also been blessed by his family, as he is now the proud grandfather of a beautiful granddaughter and has two sons soon to be married!